Understanding the carrier’s rights to recover subrogation dollars during the claim handling process is the key ingredient in the recipe for recovery in a third-party action. A carrier’s right to subrogation in New York is covered under Section 29 of the New York Workers’ Compensation Law.

An injured worker has no standing to sue an employer who carries Workers’ Compensation insurance or a fellow employee for any accidental injury that arose out of and in the course and scope of his employment.

In the event the claimant is injured by someone other than his employer or fellow employee, even if the injury arose out of and in the course and scope of employment and the injury or death is caused by a negligent third party, the claimant has the right to sue that third party.

At any time prior to the award of compensation benefits or within six (6) months after, the claimant may commence an action against a negligent third party to recover tort damages under New York Workers’ Compensation Law Section 29(1). 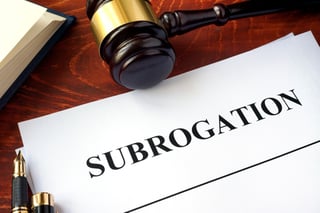 The Workers’ Compensation carrier is entitled to a lien against the proceeds of any recovery from this action for all sums paid to the claimant under his workers’ compensation claim including medical and indemnity payments. The net recovery in any third-party action for the carrier is calculated by deducting from the gross settlement all reasonable and necessary expenditures, including attorney’s fees which were incurred in litigation.

As cited in Gary L. Wickert’s book entitled Workers' Compensation Subrogation In All 50 States, an application by the plaintiff attorney to the court may be made to apportion such expenses in the event an agreement cannot be reached between the plaintiff and the carrier.

The carrier may reserve its right to recover any of the claimant’s settlement by providing a letter to the Workers’ Compensation Board reserving their rights under Section 29 within thirty (30) days after the commencement of the third-party action.

In addition to the above, New York has adopted a system of No-Fault automobile insurance which requires the owner of a vehicle to carry insurance with minimum limits of $50,000. According to the NY No-Fault Law, a Workers’ Compensation lien is not allowed against the proceeds of a recovery of first party benefits. Neither the carrier nor the injured worker can pursue first party benefits under New York’s No-Fault system.

However, a carrier may pursue loss transfer rights via arbitration if the vehicle involved weighs more than 6,500 pounds or is a vehicle for hire used principally for the transportation of persons or property (including livery).

The carrier’s right to pursue arbitration is independent of the claimant’s right to sue and includes first party benefits coming under basic economic loss that cannot be pursued via subrogation.

This exception to the Workers’ Compensation carrier’s right to recovery is not applicable to third party actions arising from an automobile accident that takes place in another state. A carrier may not interfere in an existing third-party lawsuit brought by the claimant.

If there is a cause of action for third party damages and the claimant has failed to file suit within the prescribed time limits, such failure to file constitutes an assignment of the cause of action to the Workers’ Compensation carrier. The carrier must notify the claimant in writing by personal service or certified registered mail, return receipt requested, at least thirty (30) days before the expiration of the time limit for the commencement of an action. The failure to commence an action will operate as an assignment to the carrier.

In the event a recovery is made by the carrier the proceeds are to be used to pay past and future Workers’ Compensation benefits to the claimant. Two thirds of any balance are due the claimant after deducting expenses.

In the event the claimant settles any third-party action for a sum less than the total compensation paid or payable, the claimant must obtain the written consent of the carrier or obtain an order on notice from the court approving the settlement. The purpose of this statute is to allow the claimant to receive Workers’ Compensation benefits immediately following an injury while at the same time providing a mechanism to prevent unjust enrichment and double recovery in the event of a recovery from a third-party tortfeasor.

The purpose of allowing the carrier subrogation rights and reimbursement out of the proceeds of a third-party recovery is the assurance of the claimant’s statutory right to recover.

A thorough subrogation investigation at the inception of the claim and a timely reservation of the carrier’s rights under Section 29 is crucial in order to maximize recovery in the event of any third party action arising from a Workers’ Compensation claim.